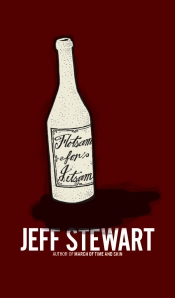 Jeff Stewart’s stranglehold vision of a rhythmically turbulent poetic pursuit comes to gas-fire fruition in his latest novel, Flotsam For Jetsam. A locomotive of a book written with an unsettling vein of urgency, surreal sensitivity to emotional detail, and seductively dark humor. Lean, fierce narrative and phantom prose shadow the hunger haunting every page. Stewart’s dynamic craft of dialogue pulls the pulse of all his players to surface: He shoves you in and  makes you become one of them. Intertwining the endearing and disturbing elements of human nature into an efficient dysfunction. To draw the swell of a tear and to bring out hysterical laughter, all on the same page, is pure brilliance.

Told through the eyes of rebel writer John Edmonds, Flotsam is chaotic proof that with the same shovel he might dig his own grave, a man can haphazardly carve his path, stumble into opportunity, shoot the moon and shake hands with stars; live an electric ride to success unfathomable, and nonchalantly yuck it up to luck. When Edmonds arrives to the alleys of Columbus, he has no idea the City will sink its fangs in deep—that it will be his catalyst. He is jobless. Womanless. A drifting, grinding writer whose perennial survival go-to is misstepping in the right direction. Always following the life of his words: Roots seemingly planted nowhere and everywhere. But there is something in the blood of Stewart’s Columbus…and the city’s blood swims into Edmonds’ blood. It kicks Edmonds’ old world out, vaporizes it, drags him to and through a frequency that pushes him to the edge; tests him to see if he’ll cross it. One minute he’s an unsung neighborhood hero, the next he’s fleeing Ohio with criminal ties, dark secrets, and the woman of his sacred dream on his arm. Slicing through the Midwest, dusted desert towns, Vegas. Gunning page after page on what he sees, the larger-than-life people he meets, writing as aggressively as he lives, cramming the action, laughter and love of one-hundred-lives into a small window of time in transition. And with a sly, silent confidence. John Edmonds slides into the splash, shine, flame and fame of Venice Beach. Shattering a sea of celebrity and seduction. A popular outcast on top of a world he turns upside down. Surprised by none of it, amused by all of it. Edmonds is a revolutionary underdog: You’ll root for him…and you’ll want to be him.

Available on Kindle, in paperback, and on Nook.

1 Response to Flotsam for Jetsam