March of Time and Skin 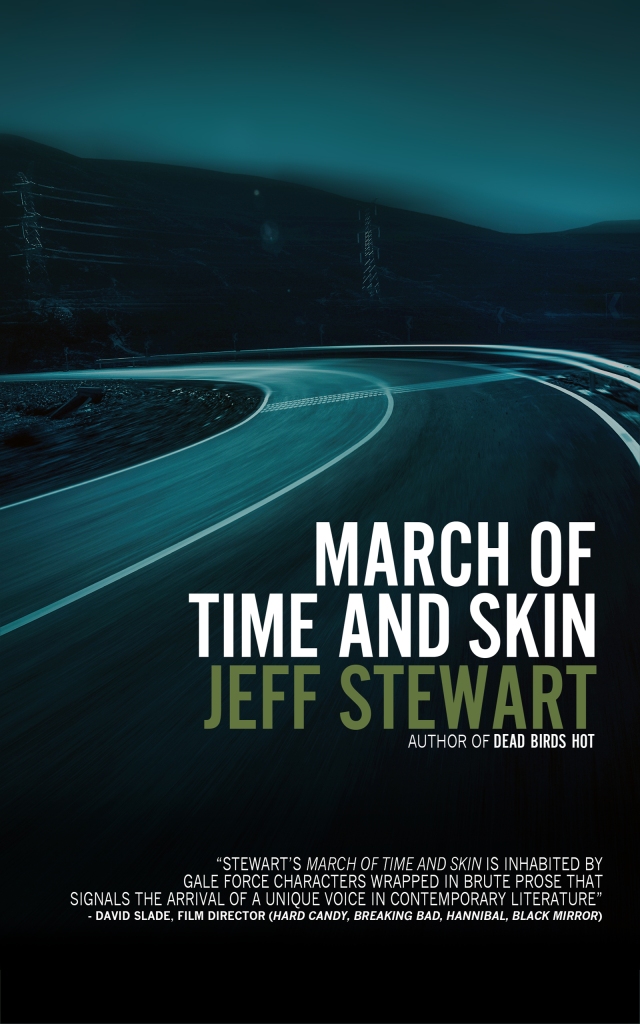 In this visually stunning road novel, Dead Birds Hot author Jeff Stewart takes you on a pilgrimage with no destination through the cities, the towns, the faces and the blood of years. In his hauntingly brutal debut novel, Stewart negotiates a stark, honest, and sometimes frightening landscape, but not without humor and the abstract victories in a life of constant motion. Grotesque and beautiful, savage and tender and relentless, March of Time and Skin reads like an epic letter fueled by loss, and its direct and unprotected look into the sun and back to the road serves as notice that we are all so agonizingly alive. A new anthem for an unwound, unsound generation.

Stewart delivers in a beautifully raw and direct style that establishes his permanence in American Literature.

Available in paperback and on Kindle

“Stewart’s March of Time and Skin is inhabited by gale force characters wrapped in brute prose that signals the arrival of a unique new voice in contemporary literature.”

“March of Time and Skin should be held up as the first work by a writer of certain future import.  Stewart has invested time in his language and made sure that his sentences emanate from a place of truth, and his courage in revealing the inner wounds, rather than pasting over them, is a generational oddity.  Here is a writer to whom one should listen, a writer whose brave voice rises straight up from Yeats’ foul rag and bone shop and manages to sing.”

Many poets and writers of my generation were influenced by Charles Bukowski. Jeff Stewart has the same spare honesty and richness of emotion as Buk, but he is not in any way an imitator. His line is strong, and outlook courageous. Mr. Stewart is a fine antidote to the entitled whining of the terminally hip.

The author’s story after leaving home at 17. He details his travels, predominantly situated in a handful of cities (Tempe, Seattle, Peoria and Los Angeles) and details his life and life style with brutal honesty – at points you can almost feel the humiliation, the pervasive sense of failure, the repressed rage.

After being ousted by his drug addled father, Jeff begins a nearly 13 year trip…detailing women, love lost, using and being used, countless jobs, pennilessness, an expedition to Alaska fishing for the Japanese, numerous junk cars, his first experiences with writing, starvation, isolation and dealing with other people’s moral depravity, being mugged, jailed and accosted by his family who inform him of their sordid history.

A very direct style, poignant yet energetic and relentless, the author stays true to his core throughout… except with that one psycho he dealt with for WAY too long. Better than Kerouac (who ‘was a p**sy’), whom I’ve read as well. Pick this up if you care to read some real, straight-up grit.